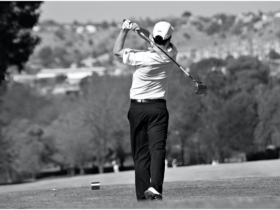 Golf. It is a beautiful game and one that can connect people from all over the world.

Professional golfers, whether amateur or pro, have been competing in this 18-hole game for over a century. The Open Championship in particular goes as far back as 1860.

About 37 million Americans alone play golf every year. So, you can imagine that it takes a lot to be considered one of the greatest golfers in the history of the sport.

Some of these great golfers are the reason why that many people are playing the sport today. Who is at the top of the list? These are five of the best golfers ever.

In a sport as popular as golf, it is hard to narrow down the list from a pool this large to five golfers. So, here are some honorable mentions.

Golf fans call him the greatest amateur golfer in the history of the sport. From 1923-30, he won a total of seven majors and retired at the young age of 28.

Jones never turned pro, so he did not see any profit from this game. However, he would probably have made the Top 5 had he played longer and won a couple of more majors.

To golf like an amateur that can be a pro, check out this article.

This is one of the icons of the sport and one of the most popular players. He won seven majors in seven years and is fifth all-time in PGA Tour wins with 62.

Many consider him one of the most important players in the history of the game, and he even has a tournament named after him to this day.

Spoiler alert, this is going to be the only non-American golfer on this list. He may arguably be the greatest international golfer of all time, coming from South Africa, and he had a prestigious career with nine major wins.

He is also the only non-American golfer to have a career major Grand Slam and he has also aged incredibly well, considering he competed in the Masters until he was 73 years old.

Ok, now that we have the honorable mentions out of the way, we can get to the cream of the crop. Here are the top five golfers ever:

Hagen is about the most old-school name that you are going to get on this list, considering his dominance started way back in 1912 when he went pro.

He won 11 majors, the last of them in 1936, putting him third on the all-time major wins list. On top of that, he had 45 wins on the PGA Tour overall.

Hagen is arguably the first big star of the sport and he has been nicknamed “the father of golf.” Hagen was also someone who figured out how to make money from the sport at a time where the line between amateur and professional was gray.

Hogan was one of the premier golfers during the World War II era, and it came at a very important time considering there were some years during that stretch where majors were not held because of the war.

He dominated the 1940s, winning three majors right after the war (nine total in his career), and was the PGA Tour leading money winner for five years in that decade.

The one man that you might argue who was better than Hogan during the same era was Sam Snead. Before someone else coming up on this list came along, this was the man who was the gold standard of winning professional golf tournaments.

Snead has 82 PGA Tour wins, tied for the most of all-time in the history of the PGA. Until very recently, he was by himself at the top of that list.

He turned professional in 1964 and got his last win on the Tour in 1965. With about 30 years of dominance and seven majors under his belt, only two could top him on this list.

This is the golfer that most people reading this will know immediately because he is the gold standard of modern golf. Woods is tied with Snead for the most PGA Tour wins of all-time with 82 and is second on the all-time majors wins list with 15.

While Woods technically did not have a calendar Grand Slam for majors wins, he did hold all of the reigning titles by winning the last three in 2000 and the Masters in 2001.

Some may think Woods should be at the top of this list considering all of his physical problems and personal life problems in the last decade or so. By the end of the 2000s, most golf fans probably would have expected him to undoubtedly be the best ever, but it just did not work out that way.

He tops the list because unlike Woods, he finished his career strong and still has the all-time majors wins record at 18. He not only has that but also 73 PGA Tour wins, which is good for third on the all-time list (only Woods and Snead top him there).

Nicklaus found success early winning his first major at 23 years old but also had late success winning three majors after he turned 40, the last of which was the Masters in 1986, where he was 46 years old.

With such a well-rounded career and someone who won every major at least three times, it is hard to argue against putting him at the top of this list.

What do you think of this list? Do you think that these are truly the five greatest golfers of all time, or would you make a different list?

For more lists like this, check out other articles in our Sports section.