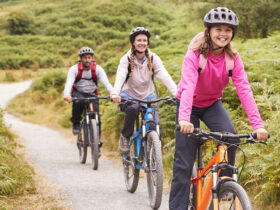 Best Outdoor activity during The Pandemic

NBA 2K21 WNBA mode allows players to experience Women’s National Basketball Association gameplay. Just like in other game modes, you will have to create a MyPlayer character when starting this mode for the first time. The player creation feature comes with 30 base appearances that can be customized. You can also use the face scan feature that is part of the mobile companion app. After you’ve settled the looks, you need to pick the play style. It’s an important decision so make sure you understand all choices before committing to one. In WNBA, the played matches are the only element that influences the player’s advancement. The starting attributes of MyPlayer are based on the player type. Let’s review the available types.

The two-way playmaker type excels at defending, passing, and ball handling. Pick the two-way forward type if you want a player who’s good with passing, ball handling, and defense for interior and perimeter. If you choose slashing playmaker, you will be proficient with passing, ball handling, and finishes close to the rim. Your MyPlayer will be good at scoring three-point goals, ball handling, and finishing inside and close to the rim if you choose the inside-out playmaker style. The same goes for the inside-out point forward style. It has the same advantages as the previous style. The two-way slasher can become a point guard, shooting guard, or small forward. This style will make you efficient with handling the ball, finishing in the proximity of the rim, and defending the perimeter. If you want to have the point forward position, consider the two-way slashing four style. It’s one of the styles that do well with handling the ball, finishing close to the rim, and also when defending the perimeter and interior. The two-way slashing five suits a center position. The 3 and D point style is good for players that want to defend the perimeter and score three-point goals. The three-level scorer can become any position. This style has the potential to score from beyond the arc, inside, and mid-range. If the offensive play suits you, choose the offensive threat style. If you are more like a defense player, go with the lockdown defender or defensive anchor. The sharpshooter style can score three-points and is good for mid-range shooting. The playmaking shot creator will handle the ball well and is proficient with doing mid-range shots. If you want to score while facing the opposite direction of the basket, choose a post scorer. The paint beast is a style that is good with interior defending, rebounds, and scoring from the inside. If you want to buy 2K21 MT coins to help you get more players, don’t forget to check out Mtstacks.com. We have fast deliveries and great prices!